In the picturesque old town, which harmoniously combines with the modern structures of the city, one breathes the atmosphere of the old fishing village.
Its origins date back to 1302, when the canal port was dug and a fortress built to defend it. In 1502, Leonardo da Vinci designed the Porto Canale.

In the oldest part of the Porto Canale, the Maritime Museum with historical boats that testify to the seafaring identity of Cesenatico. Not far away, you can admire Casa Moretti, with objects of daily use and the writings of the great twentieth century writer.

We suggest a visit to the soft sand beach with its establishments and the Giardini al Mare, a long green belt where you can sunbathe walking in peace.

Listed as one of the most famous seaside resorts, Riccione is a trendy city where fashion, elegance, bubbly atmosphere, and the pleasure of life conquer visitors. The large equipped beaches, Viale Ceccarini with its boutiques, the trendy clubs, water parks, hillside discos, the nightlife on the beach at the mouth of the Marano river are elements that make it particularly attractive to youngsters and those who love spontaneous and glamorous holidays.

Despite being known for its hospitality, fun, and good food, Rimini is also a city of art with over 22 centuries of history. The ancient Arimiunm, in fact, was founded by the Romans in 268 BC. This colony was a crucial node of communication between the North and South of the peninsula and here the Roman emperors erected monuments such as the Arch of Augustus (point of arrival of the Via Flaminia), the Tiberius Bridge (from which the Via Emilia begins, and Via Popilia) and the Amphitheater. In addition to numerous remains of Roman villas, the Domus del Chirurgo has been found here, the most important archaeological finding in recent years with a complete collection of surgical instruments from antiquity.

In Rimini in 1300, a school of Giotto painting was formed which was one of the fundamental chapters in the history of art. Testimonies of this can be found in the church of Sant’Agostino, in the Civic Museum, and in the Tempio Malatestiano, by Leon Battista Alberti, which in addition to important works, houses a crucifix by Giotto and a fresco by Piero della Francesca. Sigismondo Malatesta was the Lord of Rimini and his court was one of the most lively of the time, hosting the likes of Leon Battista Alberti, Piero della Francesca, Roberto Valturio, Matteo de ‘Pasti, and producing works that are among the most important of the Italian Renaissance: the Malatesta Temple and Castel Sismondo, by Filippo Brunelleschi. Rimini is also the home of the “Amintore Galli” Theater, a neoclassical masterpiece by Luigi Poletti, inaugurated by Giuseppe Verdi in 1857. In 1943, during the 2nd World War, it was bombed and was left abandoned for decades, however it is now about to be reopened.

Rimini is, therefore, first and foremost an important historical city, which over time has become a famous holiday resort on the Romagna Riviera and one of the major exhibition and congress centers in Europe (Rimini Fiera and Palacongressi).

Those who come to Italy for at least a week or two cannot miss a visit to this city that houses art treasures that are among the most important in the world.

There are many things to see in Florence so I can give you details on how to make this excursion and see the most important things, and above all not waste time in endless queues or looking for parking.

First of all I suggest you take the train to find yourself comfortably in the city center and walk around, because it’s wonderful to even just walking through the streets of central Florence.

I suggest you get up at dawn and drive to the station of Faenza (about 35 min from the B&B the Artist’s Villa), where you can park for free. From there you can take the small train that crosses the woods of the Apennines and in 1 hour and 40 minutes takes you to the central station of Santa Maria Novella for just 9 Euros! From here you can start the walking tour of the city that will touch the Church of Santa Maria Novella, the Duomo (Santa Maria del Fiore with the dome of Brunelleschi, Giotto’s bell tower, and the Baptistery with the bronze portal of Ghiberti), via dei Calzaiuoli, Piazza della Signoria housing Palazzo Vecchio, the Loggia dei Lanzi, and the Fountain of Neptune.

At a short distance you can then reach the Lungarno and Ponte Vecchio with its ancient Goldsmith shops and from there the Oltrarno with Palazzo Pitti and the Boboli Gardens, where you can relax among statues, fountains, and ponds. If you want to enjoy a suggestive view of the center of Florence you can take a bus and reach the nearby Piazzale Michelangelo and the Abbey of San Miniato al Monte.

On the way back I suggest you stop at the Church of Santa Croce and, if you want to see the real statue of David and other incredible sculptures by Michelangelo, visit the Accademia Gallery.

A bit tiring as an excursion perhaps, but it’s worth it. Florence and its treasures are waiting for you!

About 50 minutes from the B&B Villa Anna you can reach this magnificent city that was the capital of the Western Roman Empire. Ravenna is famous above all for its Byzantine mosaics, which are unique in the world and which have made it included in the UNESCO World Heritage List. Also to be seen:

In about 50 minutes by car from the Villa of the Artist you can reach this city considered the “cradle of the
Renaissance” due to its immense historical and artistic wealth which has entered it among the UNESCO heritage.

The origins of Urbino are very ancient, but it is in the fifteenth century that the city lives its maximum splendor thanks especially to Federico di Montefeltro who attracted in the Duchy the most important artists of the time: Piero della Francesca, Luciano Laurana, Leon Battista Alberti, Francesco di Giorgio Martini, Girolamo Genga, and Giovanni Santi (Raffaello’s father). Urbino, located between two hills and surrounded by a long city wall, offers an evocative panorama. The majestic Palazzo Ducale (home to the Galleria Nazionale delle Marche with works by Piero della Francesca, Giusto di Gand, Paolo Uccello, and Raphael) is linked to the ducal stables (the Data) by the magnificent helical ramp.

The city also hosts the Carlo Bo, one of the oldest universities in Italy, a famous Academy of Fine Arts and the Institute for Decoration and Book Illustration.

In about 30 minutes by car from the bed and breakfast Villa Dell’Artista, you can reach the Salina di Cervia which is part of the Regional Park of the Po Delta. It is a unique environment both from the naturalistic point of view and the suggestive landscape that it offers, recognized as a Wetland of International importance and since 1979 Nature Reserve.

The Salina di Cervia is a unique environment: the depth of the water is only a few centimeters and the high concentration of salt has selected a flora and fauna suitable for surviving in extreme conditions. 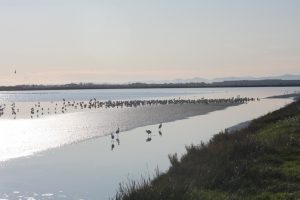 There are almost 100 species of birds that can be found in the salina and among these the flamingos stand out.

During the opening season it is possible to make guided tours and excursions on foot or by electric boat.

Just over an hour’s drive from the B&B the Artist’s Villa is the Parco del Cònero: an area protected by the richness of plant and animal species. The heart of this natural oasis that stretches for 5800 hectares of protected area is Mount Cònero which rises to 527 meters overlooking the sea. Below the mountain, between rock and lush vegetation, there are numerous beaches with crystal clear sea: some are easily accessible, others more hidden are reachable through steep paths or by sea.

Among these I propose the beach of the Two Sisters (so called due to the presence of two enormous rock emerging from the sea), the beach of Vela (with one rock in the shape of a sail) and that of Mezzavalle. The Riviera del Cònero that stretches between Ancona and Porto Recanati is a marvel:

Immersed in the Mediterranean with a Medieval tower, a Napoleonic fort, and the Romanesque church of Santa Maria, which dates back to the eleventh century. A medieval village overlooking the sea and the unique Marche Region, rich in archaeological excavations. The Church of St. Nicholas of Bari built in 1200 dominates the square, the Piceno necropolis in the area of ​​”Pini”, and the Church of San Pietro al Conero (XI century) by the Benedictine monks. With the Antiquarium that collects the treasures of Queen Picena and other necropolis, the Sanctuary where the “miraculous” wooden crucifix is ​​kept, made, according to tradition, by those who deposited the body of Christ from the Cross and the Arch ” Torre “, rest of the medieval tower of the Church of San Giovanni.

A 30-minute drive from Villa Anna will get you to this protected area located between Gabicce Mare and Pesaro, which has obtained the recognition of Europarc Federation and has been included in the European Charter for sustainable tourism in protected areas. The Park is crossed by a panoramic road that houses the ancient villages of Gabicce Monte, Casteldimezzo, Fiorenzuola di Focara, Santa Marina Alta, and the small port of Baia Vallugola.

At the foot of the cliffs runs a thin pebble beach, formed by the landslide of the rocks above.

The vegetation of Monte San Bartolo is characterized by woods of oak, hornbeam, brush, and rare species such as maritime flax, cliff rush, and carrot.

The Park is home to many species of birds: falcons (pilgrims, pumas, and swamps), pale albanella (a rare species that comes from Africa to nest in Europe), smergos major, cormorant, grebe, eider, gulls (saffron, gavina, coral, both common and royal), as well as gray herons, egrets, and royal swans.

In the park you can also meet deer, foxes, badgers, porcupines, weasels, and dormice.

Just 35 minutes from the Artist’s Villa, you can reach the Classe Pine Wood to discover the aspect that the Romagna coast had before human intervention.

Twelve hundred hectares of Mediterranean vegetation with clearings and brackish ponds. A point of great interest is the mouth of the Bevano river, which is one of the areas of greatest naturalistic value and offers an almost unique landscape.

Protected behind the Pine Wood, the Bassona Beach, awarded by Legambiente as one of the eleven best resorts on our coast, with its dunes living in continuous remodeling.

This website uses cookies to improve your experience while you navigate through the website. Out of these, the cookies that are categorized as necessary are stored on your browser as they are essential for the working of basic functionalities of the website. We also use third-party cookies that help us analyze and understand how you use this website. These cookies will be stored in your browser only with your consent. You also have the option to opt-out of these cookies. But opting out of some of these cookies may affect your browsing experience.
Necessary Always Enabled

Any cookies that may not be particularly necessary for the website to function and is used specifically to collect user personal data via analytics, ads, other embedded contents are termed as non-necessary cookies. It is mandatory to procure user consent prior to running these cookies on your website.